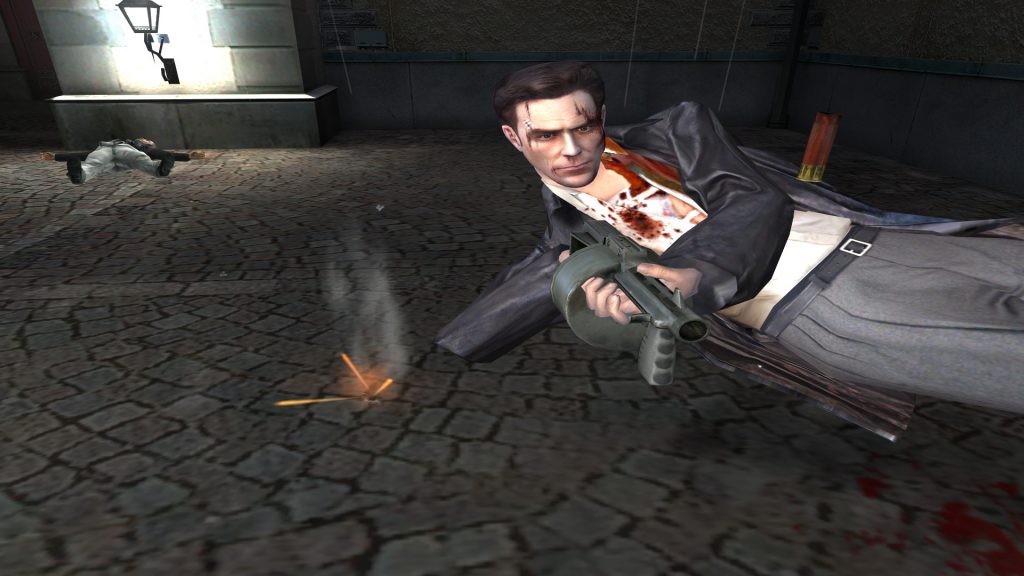 Quiz time! Is Max gonna shoot his way out of the hospital? Hell yea.

Max Payne 2: The Fall of Max Payne starts in the middle of the thick of things. You’re in the hospital wondering how, what and why. You look around only to find yourself, bandaged and unrecognizable (Possibly due to the better facial animation and graphical fidelity). The rain and rhythm like thunder are reminders that you are in a noir story. As your dazed-self inches out of the ward, you are greeted with a hallucination of Mona Sax. She adds the ‘love’ in “A Noir Love Story”. You begin to delve deeper, not sure whether into a fragment of your mind or the actual hospital. You soon come across a 9mm and just as que, a bad guy appears. Time slows automatically, and you shoot the masked perpetrator. He ragdolls dead rather impressively and breaks the shelves behind him. Now, you know Max Payne 2. 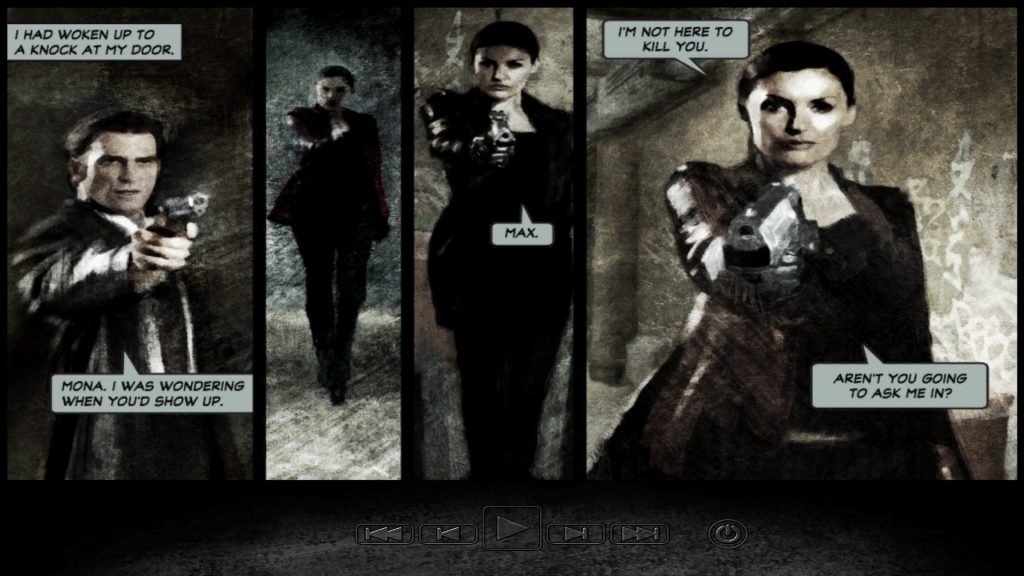 The comic book sequence makes a return. This time with far more detail.

Let’s just get one thing out of the way, the writing is as superb as ever. Max seems to have found time in the 2-year gap between the sequels, riding all kinds of modern literature. Things were quite confusing at first. Especially if you’ve not played the first game but throw in a couple of predictable plot twists and you’ve got a really engaging story. The best way to experience the package is to replay the story again to get a clearer overview of it all. Honestly, I feel that Mona Sax served as Max’s desire – like how revenge for his wife was. He doesn’t really care about the whole arms dealing and gang tropes that we are used to. In fact, I’d say that the story relatively uses that as a backdrop for the ‘love’ story that ensues. Overall, I felt l that the story was slightly weaker. Mainly because it felt as though most of the plot twists were done for convenience’s sake. While Max Payne 1 was almost a clear-cut revenge story, Max Payne 2 felt like a love-sick puppy story. Gone is ‘constipated’ Max from the first game. Almost every character in the game is remodel. Talk about progression.

It is amazing what 2-years of graphical evolution can do. Apart from the Hud, Max Payne 2 looks nothing like the first entry. Enemy models are also varied ranging from your detestable first grade gang member to gangs in cleaner uniform. The excellent voice acting continues, this time with proper lip syncing. Enemy banter between one another returns as well, this time with less repetition. Now, the big difference here, and probably one of the game’s best improvement, is the new physics engine that was utilised. This match made in heaven has enemies not only interacting to gunfire, but also the environment around them. The bodies will ragdoll off a bunch of boxes and the boxes would move aptly. This really adds to the satisfaction of blasting a bunch of them while all in bullet time, only to watch them contort realistically once the bullet time stop all at one go 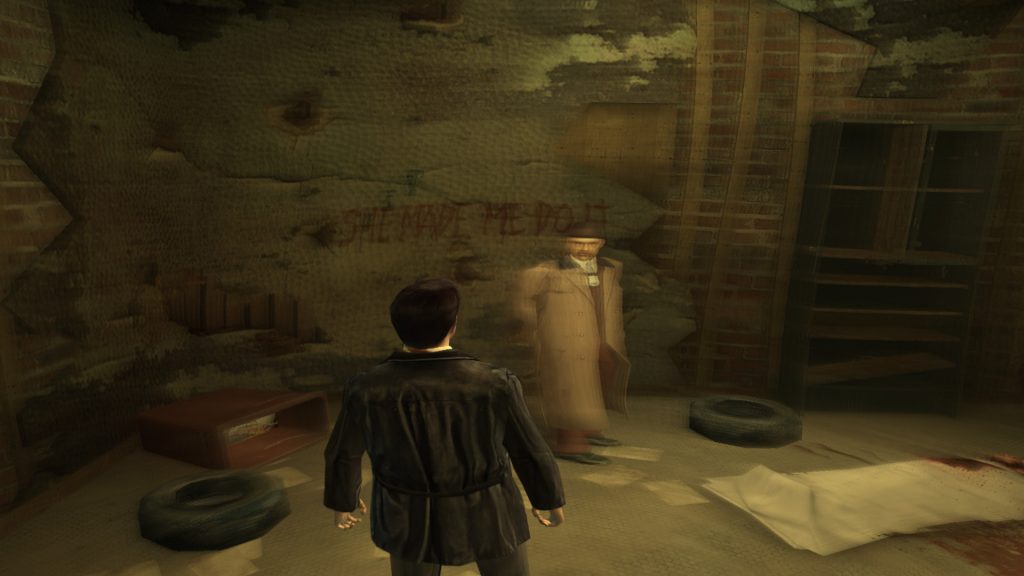 The dream sequence no longer has that weird platforming sections. Now, they are punctuated by the heavy use of visual distortion.

This is where things get a little divided. The shoot dodge mechanics now have been changed somewhat. Max can now shoot even after he has landed on the floor. However, the bullet time concept has been revamped almost completely. Bullet time now lasts longer and fills up much quicker than the first. Its effects are heightened as you kill enemies. At one point, Max will not be affected by the bullet time and becomes a blur – killing dozens and dozens of bad guys at will in super slow mo. 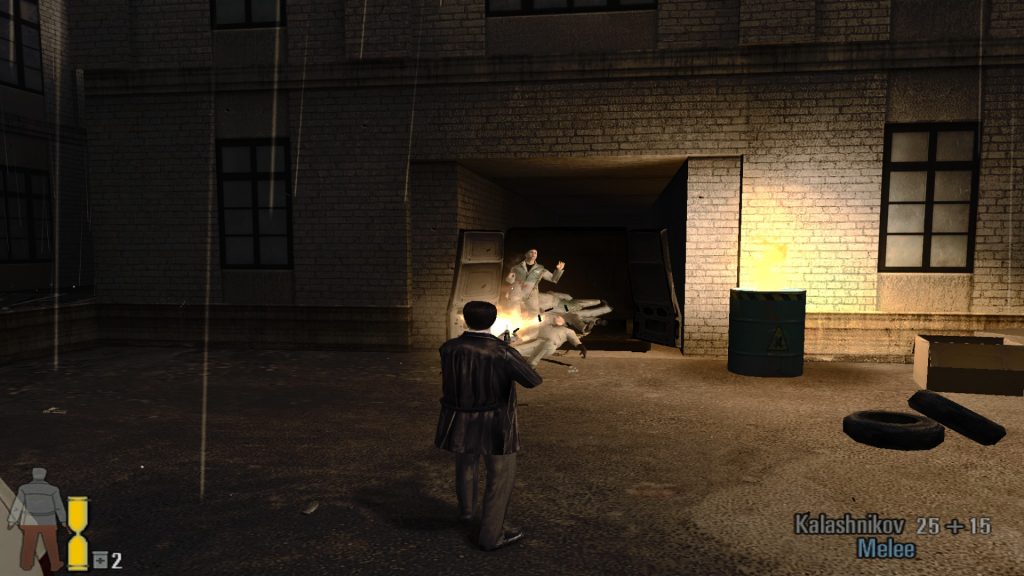 An example of Max in ‘max’ bullet time as seen by the yellow tint on the screen. Those buggers in the van stood no chance. Note the dead bodies

The gameplay in the sequel certainly encourages a more fun and daring approach as compared to the sometimes-methodological approach in the previous entry. Personally, I felt that the gameplay wasn’t as satisfying as the first one as there is little thought put into the enemy encounters. In the previous game, you’d carefully plan when and where to use your bullet time. I mean there were sections of the game that I went through without the use of it. But in the sequel, you feel obligated to use bullet time for the simplest of enemy encounters simply because you can afford it. Another department that I felt that was lacking, was the weapon variety. It was largely based on the first game and overall, the gun sounds are far weaker. 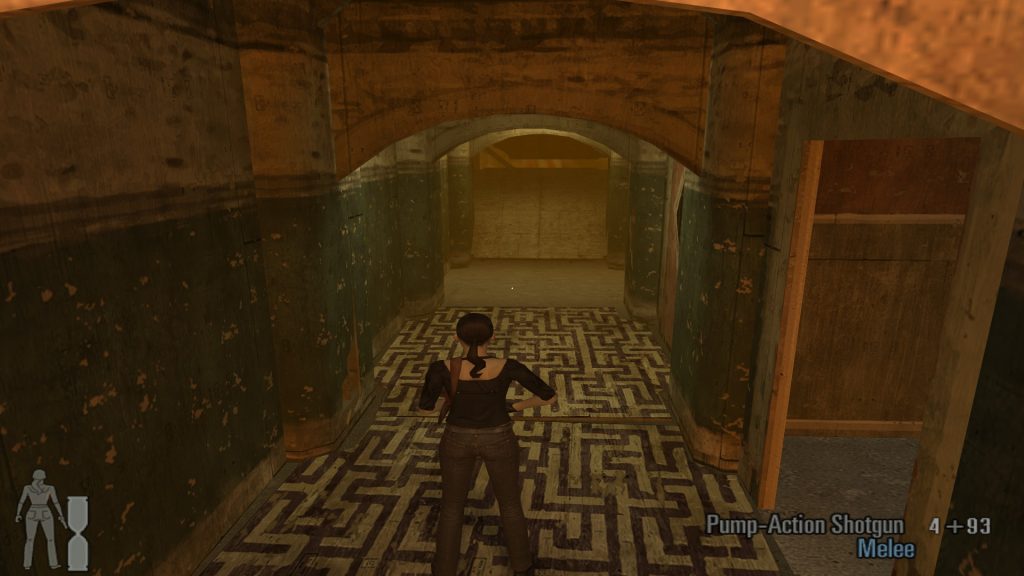 Mona retains all of Max abilities. She has an extra cartwheel move in place of the dodge which moves faster and overall more slick looking. Feisty.

However, one thing the sequel did better was the mission variety. You have missions where you’d have to protect an NPC and guide him along. There are also a couple where you play as Mona Sax. She felt more agile than Max and has access to the Dragunov. Cool stuff. There are also a few missions where Max is in a combat free zone, allowing him to explore the Police Headquarters and interact with NPCs which always leads to some really funny encounters. Replayability is also something where the sequel delivers. The new entry being survival missions will really test your skills to the Max (Pun intended).

In some occasions, Max will be assisted by NPCs like these two. They’re not really that effective in combat but it is refreshing to see people on Max’s side.

Max Payne 2: The Fall of Max Payne is more than a competent third-person shooter. In fact, it is probably one of the best of its kind on the PC. However, as a Max Payne game, it falls short in delivering something that was as good and impactful as the first which is no easy feat. The story wasn’t as compelling, and it was less dark overall. Make no mistake, The Fall of Max Payne is still an excellent game. It can be highly addictive, especially when you try and clear a room of bad guys as fast as possible. While the first entry was probably an excellent choice for those drawn out school holidays, to really soak in the atmosphere, Max Payne 2 is perfect for lunch breaks to keep those trigger fingers satisfied.