Though Max Payne has in-game cut scenes, majority of the story telling is done through comic panels such as this. Some objects that you interact in the game will also trigger this.

The game starts you off at the end of all things. As Max Payne pierced his gaze (or squinted) upon New York on a helipad under the vicious snowstorm that seemed to be raging on for an eternity. The story then hastily transports you to grainy comic panels of silver, white and black. You then know who Max Payne truly is. A family man, who just smoked his last cigarette because it wasn’t good for “the baby”. That was as positive as the game got. Without spoiling the story, Max is on mission to find those responsible for the murder of his wife and daughter. It may sound cliche, it probably is, but Max Payne manages to deliver with its brilliant writing that expertly concocts dark humor and intelligent metaphors throughout the story.

“You’d find that Lady Luck was really a hooker, and you were fresh out of cash.” My personal favorite. Max recovering from the shoot dodge mechanic while finishing off the goons.

What sets it apart from other action games of that time was the shoot dodge mechanic. It was an obvious inspiration from action of flicks during that era such as The Matrix and the numerous John Woo films.

With a click of the right mouse button, Max will dodge in the direction of where you’re moving while things around him slows down. This allows for stylish shoot outs that would bring a sadistic smile to even the casual of gamers. Some of the enemies will also dodge your shots. Max also has the ability to slow down time to crawl (though this affect Max’s speed as well) to pick off enemies with ease. Guns are well animated, even better than the facial animation .Notice the bullet shells.

Interestingly, bullets in in this game are real projectiles and not just flashes of light to simulate gunfire. This, coupled with Max’s abilities, means that you are able to literally dodge bullets in real time. Accommodating to the title of the game, Max refills his health by consuming painkillers, which can be hard to find if you are not exploring the environment, between or in the middle of shootouts.

I really appreciate the details that went through the environments. Max can shoot soda cans which would leave foam before the entire thing evaporates into thin air. There are also televisions throughout the game that plays their own show, my favorite being “Address Unknown.” But I think what ultimately sells this game is its atmosphere (even though character models are a little hit or miss). From drab palette of color used throughout the game to the junkies in abandon buildings muttering nonsense nearly every detail of this game helps build up the atmosphere and let me tell you that the game can get depressing at times. This game is not without its flaws, though shooting can be fun, you will quickly realize that some guns are just not too fun to shoot with. This is especially jarring in the early stages of the game where you had to rely on mostly your Berretta and Pump Action shotgun. Enemies will also mostly carry those 2 weapons. 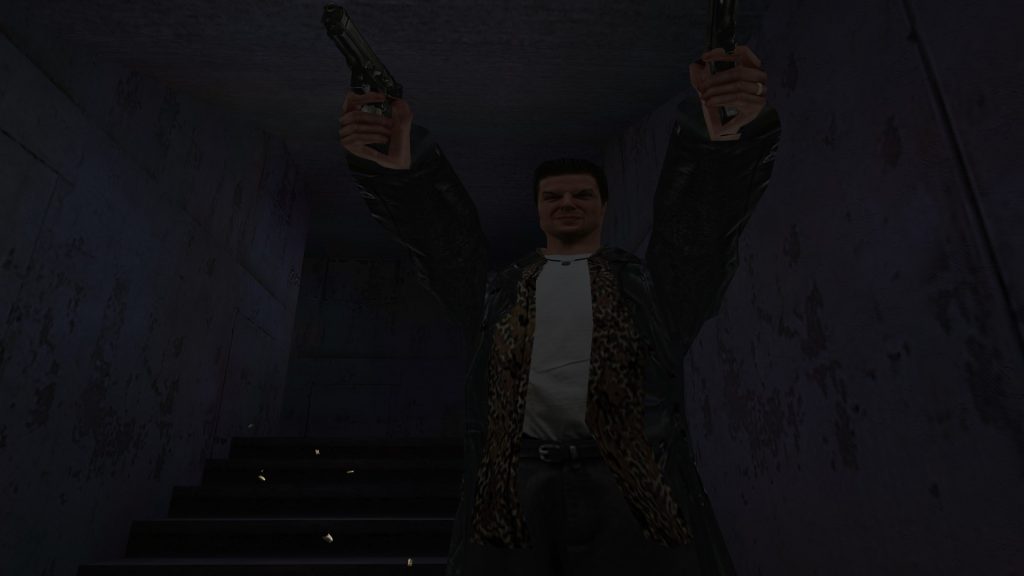 The dual Berettas are a different story though.

This game is mostly fair but I found myself dying without even knowing where the enemy was 50% of the time or I was stuck in those bullet sponge bosses that are littered in the game.

Max Payne is easily a classic, in fact, I’d list it as one of the relics from the early millennium. A relic of what games were all about before money and greed crept in. It undoubtedly manages to tell a hair-raising story without the very mention of “ghost” or “alien” instead it chooses to make a horror show of something else. Something more relatable. Us.